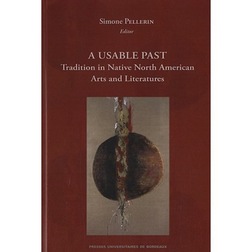 Tradition into Abstraction
The Painted Work of Janice Toulouse
“Renaissance rouge” typically served as a statement on the reemergence of First Nations art on an international scale. Her work evidently not only accompanied the political emergence of her people but buttressed and invigorated it exactly as literature did then. We then spoke for example of the “Renaissance of American Indian Literature” (this was the title of a book on such literature by Kenneth Lincoln). Janice has explained that her art has always been about change and challenging the stereotypes and ways that Native people are viewed. This could be seen in important exhibitions such as the early 90’s Paris shows where Native artists grouped together in 1992 to present “LA CONTRA INFORMATION, Columbus De-celebration.” It was also shown in her solo show in Toulouse in 1994, the “Torso Series” exhibition that was shown in Paris (Fulgence Gallery). A critic explained how her paintings evolved within the world of shamanism, and how, even if one could imagine them influenced by surrealism, they were in fact the continuation of the vision world of Aboriginal people.  Bernadette Cellard (excerpt) 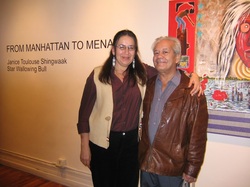 Toulouse Shingwaak heals through her art

Through her art, Shingwaak has rediscovered the mystery of painting as healing. NORTHERN ONTARIO - The north woods grew dark, and Janice Toulouse Shingwaak, Ojibwe/Anishinabe Kwe, paused after teaching art history of the First Nations. She considered her 20-minute walk home through the woods in the night. ''I hope the bears don't smell my two bags of groceries. I'm Bear Clan, so they shouldn't bother me - they are my brothers,'' Shingwaak said. This moment is like so many others in her life: struggling and taking risks to stay true to her life's work.

Shingwaak's journey in art took her to France, where she spent several years and which later inspired the Traveling Alter Native Medicine Show, a mixed-media documentation of her 4,000-mile road trip and revision of history from an aboriginal perspective. Shingwaak's art also captured her an acclaimed artist in residency
fellowship at the National Museum of the American Indian in New York City in 2002. Her most recent show of paintings was in 2006, ''From Manhattan to Menatay,'' a two-person show with Star WallowingBull at the American Indian Community House Gallery in New York.

But her most potent realizations have been within: the rediscovery of her ancestors' gift of medicine and the mystery of painting as healing. She was born on Serpent River Reserve at Lake Huron, where she grew up. She is a descendant of Grand Chief Shingwaukonse and Ojema Kwe of Garden River and Senator Chief William Meawasige of Serpent River. Art and the original energies inherent in creating have become her medium for healing. ''It is really powerful. It is not about promoting myself as an artist; I have always done the work of the ancestors. They are doing it along with me. I listen to them. The important part is the healing. ''The spirit made in the painting is to remind the people to follow their traditions and to have a healthy way of living.'' Shingwaak's life has been one of struggle and gifts, stemming from inspiration. For her, it began as a teenager when she felt the urge to move as far south of Toronto as possible. Warm San Diego was her destination and after she arrived there, at age 18, co-workers recognized her talent.

Healing was the focus of her residency in New York, where she learned from the Lenape (Delaware) people. She discovered they were linked to the Ojibwe, as both are Algonquin-speaking peoples. She researched Lenape culture with the goal of assisting them with the repatriation of their homelands and encouraged them to have their own voice in repatriation.